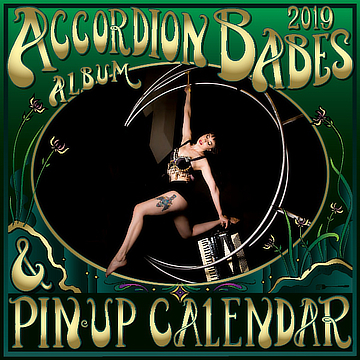 The photos in the 2019 Accordion Babes Calendar combine a timeless 1940’s pin-up aesthetic with modern photography, appreciating women and accordions in a way that’s sensuous, fun, and inspiring. 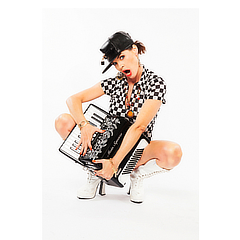 When multi-instrumentalist Onah Indigo first picked up the accordion, she had to put it down. It was heavy, awkward, annoying. Yet eventually, she found an idiosyncratic stance that puts the instrument center stage, while defying its limitations. Like the push and pull of bellows, this tension generates a quirky blast of energy. Add club beats, underground MCs, freaky variations on deceptively familiar keys, a bit of surrealist wit, and a rebellious fight for greater openness, and you have noaccordion. 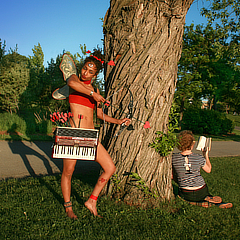 A picked-it-up-in-the-street kind of musician, Sapo likes to tell stories with her songs and spoken word pieces, in French, English, Spanish and German. She studied theatre and film- making, traveled for a few years in between. Now based in Montreal, she is also known as Melodona, an accordion repairwoman. 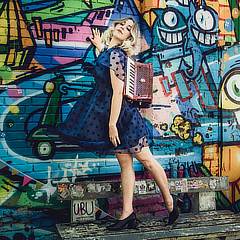 The Norwegian singer Guro von Germeten, stands out as delightfully burlesque with melodic boldness, intriguing lyrics, a great voice and a heart made of pure passion – all with a twist of vintage jazz, enchanting pop melodies, balkan beats and a touch of film noir. She originally trained to become an opera singer, but picking up her first red accordion nine years ago really changed her life and love in music, and there has been no looking back since. Her song, Sti uten sted å gå – is a tale of a girl who rather set herself – and everything around her, on fire, than be trapped and left behind in boredom. 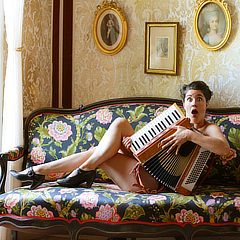 Charlotte began studying piano at the age of five. She is a professional actress who has always used music as part of her work, and she took up the accordion when a director asked her to use it in a play.

Charlotte created her band Les Biches Cocottes with two fellow actresses as an experiment when a bartender asked them to create a show with maritime songs and traditional Breton music. Their concert featured intense polyphonic singing and theatrical staging techniques; their act became so popular that now Les Biches Cocottes are playing all over the world. 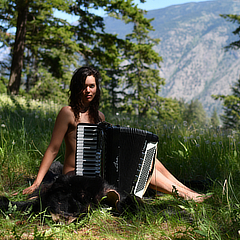 A grasp of a time told by our fingertips. The chaotic clutter that was tangled in our heads, put into fleeting moments of melodies that have already passed us by.

Photo: Alphred Gaede
Additional Credits: Thanks to Long-Gone New Orleans recording studio, Jocose Bird and all my friends who’ve got my back. 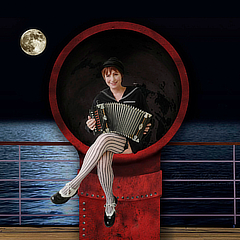 Ann Savoy has dabbled in traditional music since the age of ten. Though most of her career has been the playing of and writing about traditional Cajun music, she became known by a larger audience for her CD of duets with Linda Ronstadt, “Adieu False Heart”, and her Pandora recording by Ann Savoy and her Sleepless Knights, her gypsy swing band.

Over the years she has traveled the world in her Cajun bands Savoy Doucet, Magnolia Sisters, and Savoy Family Cajun Band. She is a four time Grammy nominee. She and her music have appeared in two major motion pictures. 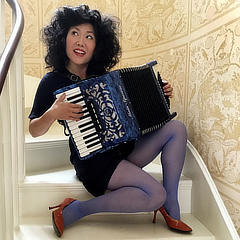 Susan Hwang is a Brooklyn singer-songwriter and performer. She founded, curates and hosts The Bushwick Book Club – an international performance series and podcast presenting new songs, dance, visual art and sometimes snacks inspired by literature. Her duo with Charlie Nieland is called Luster lit, and they refuse to play anything but songs about books. Susan plays accordions because they are pretty and lighter than pianos (barely). She plays drums because it’s healthy for a girl to hit things. 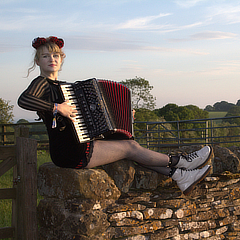 Squeezebox Rosie is the accordionist for British alt rock band Holy Moly and the Crackers, who constantly tour their raucous danceable music in festival fields, late night bars and village halls around the UK and Europe. When not on tour she is a costume designer for the circus and an amateur trapeze artist. One day she hopes to perfect playing the accordion whilst hanging upside down on an aerial hoop!

Photo: Nick Tyler
Special thanks to Ruth for lending us her professional camera! 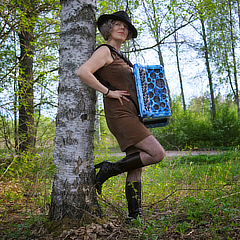 Anitta comes from Finland and began playing button accordion when she was 8 years old. There was an accordion in her home when she was a child, because her father played accordion, too. Nowadays, Anitta performs solo, but more often with her husband Jouko, She also plays in the accordion trio Trio Aurore. 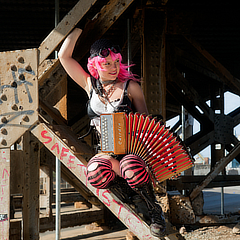 From street shows to big festivals, from pubs to castles, Renée de la Prade plays rock, blues, and folk music with great passion and grooves. This pink-haired rebel weirdo troubadour has toured in ten countries and now splits her time between Hamburg, Germany and San Francisco, California. Renée plays rock and folk music on Irish button accordion, welding arrangements together with footstomps, power chords and intricate bass lines; she also plays guitar and ukulele and harmonica and sings in four languages. She plays solo and with many groups, including Rebel Lovers, Culann’s Hounds, Ship Cats, Whiskey & Women, and The Accordion Babes, an ever-revolving group comprised of women in the Accordion Babes Calendar. For the last ten years Renée has edited and produced the Accordion Babes pin-up calendar, skipping the 2016 edition to marry Ingo, the drummer for Rebel Lovers. 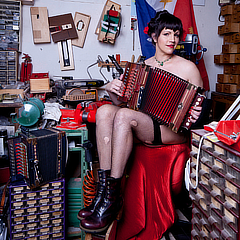 “Sarah is a rollicking, high-spirited lady brimming with passionate energy and a restless appetite for life. Multilingual, multi-instrumental, she approaches motherhood, professional level cooking and button accordion playing with the same hard-working dedication and adventurous spirit.

Her larger-than-life voice leads her Paris-based Hell-Raising Hayride band into her own personal take, rich with boogie and verve, on the Cajun music she learned at her famous parents’ knees – a modern sound that still feels like it’s straight out of Goldband Records.” — Yves Dorémieux 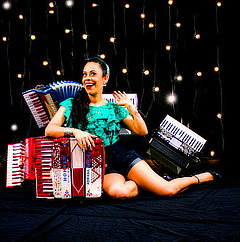 Adriana is a Hohner-sponsored artist who adds her beautiful voice, accordion, piano, and musical arranging skills to many projects. She toured the world with two large-scale productions: Orquídeas do Brasil, Adriana Sanchez, Guilherme Rondon, Rafael Alterio. She founded the band BARRA DA SAIA in 1998, which blends traditional Caipira music with rock.

Their album Roça’n Roll was nominated for a Latin Grammy in 2007.

Her most recent album called Salve Lua & Todo Interior é Igual is a tribute to the music of Luiz Gonzaga. 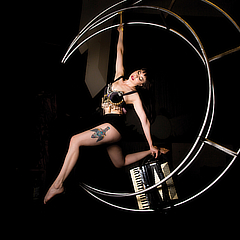 Erica fell in love with the accordion while wandering the streets of a Tuscan village. In addition to playing in her NYC-based band, The Bee’s Knees, she has collaborated with diverse artists including Gotham Easy, Mösl Franzi & The Jajajas, Irka Mateo, Jeff Lederer, Bon Musique, King’s County Pipes & Drums, her mentor, William Schimmel, and more. She has played everywhere from Lincoln Center and Radio City Music Hall to mausoleums and parties on abandoned ferry boats. She is one of the few aerial accordionists in the world and can perform in the air with a 20 pound accordion strapped to her body.

Photo: Stephen Pyo
Additional Credits: Thanks to the House of Yes and Anya Sapozhnikova for location/aerial moon apparatus, costume by Queen of Ruffles.