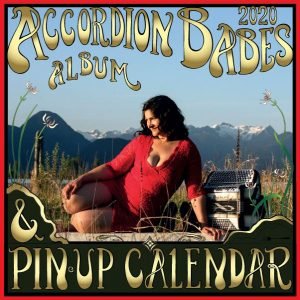 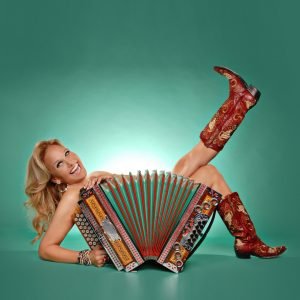 LynnMarie is a five-time grammy-nominated pioneer of modern polka music. The musical blending of her traditional Slovenian roots with country, folk and pop has garnered her worldwide recognition as a polka innovator. Her high-energy button accordion playing and her engaging stage presence have wowed fans, critics, and media alike. Jay Leno, host of The Tonight Show referred to LynnMarie as “the Dixie Chick of Polka”, and Rolling Stone Magazine said, “LynnMarie is one soulful polka diva!” LynnMarie has performed and collaborated with many artists, including Willie Nelson, Flaco Jimenez, Dobie Gray, Riders In The Sky, and country music superstar Vince Gill.

In 2018 LynnMarie was inducted into the National Polka Hall of Fame. 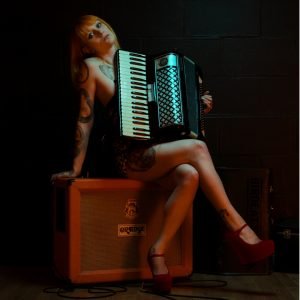 Mishkin Fitzgerald is best known for her role as lead singer and pianist in the British ‘orchestral punk-rock’ band, Birdeatsbaby. As a solo performer she plays darkly tinged ballads and melancholic alt-pop tunes. Daughter of a church minister and a maths teacher, she was influenced heavily by classical piano music and opera, and then later by alternative artists such as Nick Cave, Patti Smith and Kate Bush. She has created a sound that is distinctive, fragile and unapologetic. Her debut album Present Company was produced by Forbes Coleman of Stereophonics fame, and her second album Seraphim is widely acclaimed in the UK and Europe. More recently she has been running her own independent music events under the banner of “Indie Noir Presents” in London, Brighton & Oxford. 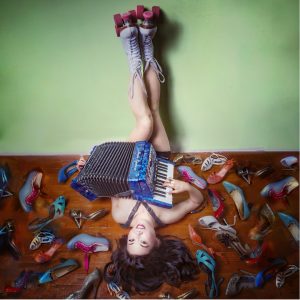 Susan Hwang is the founder, co-producer and host of The Bushwick Book Club. She’s a singer/songwriter and multi-instrumentalist who has toured internationally performing music and theater. Her duo with songwriter/producer Charlie Nieland is called Lusterlit, and they refuse to play anything but songs about books.

She plays accordions because they are pretty and lighter than pianos (barely). She plays drums because it’s healthy for a girl to hit things. 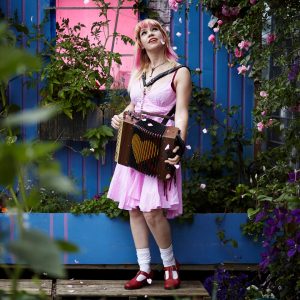 Renée plays folk and rock music on Irish button accordion, fusing many rhythmic styles into a foot- stomping show that sends out good vibrations wherever she goes. Based in Hamburg, Germany, and Oakland, CA, she sings in four languages, plays zydeco like a monster and tours solo, also with the following groups: Rebel Lovers (with husband Ingo Bräuning), Shipcats, Culann’s Hounds, and the Accordion Babes Revue; and formerly with Americana trio Whiskey & Women. 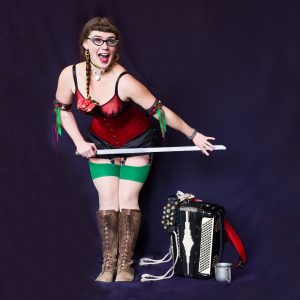 Calvaleigh is California born and bred, but aspires to even greater origins. She began playing accordion at the age of 16 at the behest of her father, because “Every girl should play the accordion.” She plays archaic dance music from countries around the Island, the Continent, and the Colonies. She’s a regular performer at the Renaissance Faire and the Great Dickens Christmas Fair, with the Pipe & Bowl Morris, the Newcastle English Country Dancers, as well as “The Bruno Band,” “The Newcastle Waites,” and the “Thrupenny Uprights.”

Additionally she plays in the duo “Viadeyra,” along with some solo work.

Calvaleigh is also a drummer, a massage therapist, gardener, and multi-media artist.

JUNE
Debra Peters, the Zy-de-cow-girl
www.debrapetersmusic.com
CD track 05: “One Step Ahead of the Law” — Debra Peters 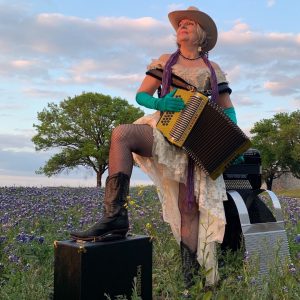 “Austin,Texas’ Debra Peters wears many hats as a bandleader, entertainer, recording artist, singer/songwriter, session musician, music teacher and entrepreneur. As a professional accordionist/pianist and vocalist for nearly 3 decades, Debra Peters has been recognized for what few women in the business have been able to accomplish. In addition, a hearty tip of the hat to Debra Peters because she has managed her own band for twenty-five years, a very rare feat for a woman in the music industry.” — Christa O’Neill, Accordion Americana 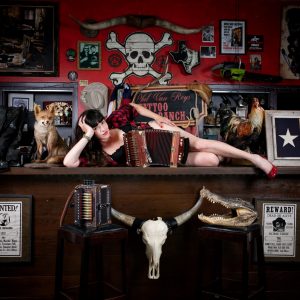 “Sarah is a rollicking, high-spirited lady brimming with passionate energy and a restless appetite for life. Multilingual, multi-instrumental, she approaches motherhood, professional level cooking and button accordion playing with the same hard-working dedication and adventurous spirit. Her larger-than-life voice leads her Paris-based Hell-Raising Hayride band into her own personal take, rich with boogie and verve, on the Cajun music she learned at her famous parents’ knees – a modern sound that still feels like it’s straight out of Goldband Records.” — Yves Dorémieux 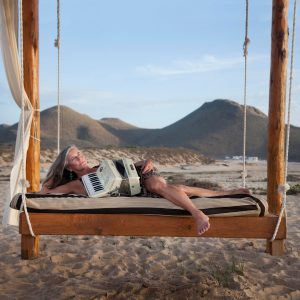 Pianist and vocalist Wendy Fitz is a true veteran of the San Francisco bay area music scene. She studied classical piano as a child, and later turned to rock-n-roll as a teenager in the 60’s. Wendy is at home playing many styles including R & B, rock, traditional country, western swing and jazz. She’s influenced by the piano styles of professor Longhair and Floyd Kramer, and jazzers like Bill Evansand Keith Jarrett. As a songwriter, she’s inspired by Carole King, Bonnie Raitt, Bessie Smith, Patsy Cline and Peggy Lee. Wendy plays a weekly jazz gig at Sorella Caffe in her hometown of Fairfax, California. She’s a founding member of popular Americana roots band, Todos Santos, where she is featured on vocals and accordion. She collaborates with Rough Country, Loaded Ponies, WTJ2, Fitz & Pieces, and many other bands. 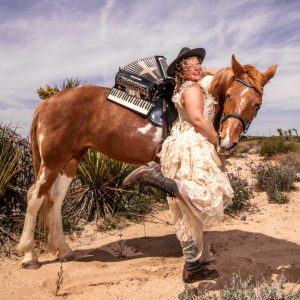 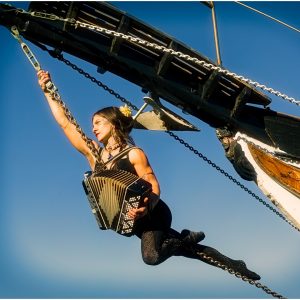 Aurelia Anne Cohen is a Performance Artist, Aerialist, Song Writer, Accordionist, Model, Actress, Freak, Director, Designer, Instructor and Event/Fitness Consultant.
Originally from Tucson Arizona, Aurelia trained in Classical Ballet, Folk Dance and Theater in her youth. At 14 years of age, she discovered the aerial arts and soon entered the world of Professional Physical Theater, Spectacle and Circus Arts. She began traveling, teaching and performing internationally in 2006 and hasn’t stopped, from the Southwest deserts to the Pacific Northwest, to Europe and around the globe. In her limited free time, she enjoys working with her horse, sewing, tinkering with Violetta, her ’66 Volvo, and baking pies. 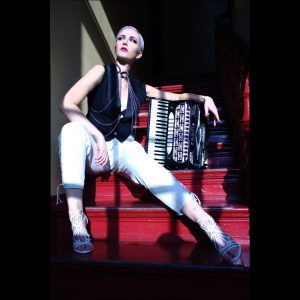 Miss Natasha Enquist is a Canadian multi-disciplinary artist, based somewhere in a space-time travel continuum between Berlin, Germany and the Pacific Northwest of Canada. Touching on her Slavic roots, “The Anniversary Song” has been a song that means a lot to her and her love for story-telling through song. Treating the accordion as a human-powered synthesizer, MNE is bridging the gap between electronic pop music and the accordion, with her dreamy, dark, romantic “electro-accordion chanteuse” style.

Photo: Magnus Arrevad
Additional Credits: Thank you to the photographer Magnus Arrevad, and Benedetta Baiocchi for styling this shoot, jewelry by Perlensaüe; on location in Berlin, Germany in the stairwell of the apartment building where my dearly missed friends Phil Stein and Fayez Samara once resided.

DECEMBER
Meredith Pangrace
maurarogers.com
CD track 06: “Anything at All” — Maura Rogers & The Bellows 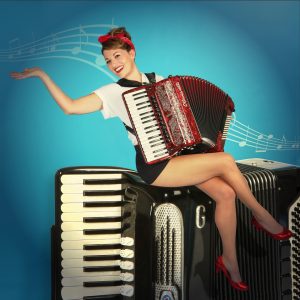 Meredith grew up listening to eastern European accordion music at family gatherings in Cleveland, Ohio. Her love of the instrument and it’s nostalgic sound led her to pick one up and
start playing along to folk and rock songs with friends. As her interest grew, she found a singer-songwriter that welcomed her with open arms, and is now the “Bellows” in Maura Roger and the Bellows. MR&B play regularly in Cleveland and around the country promoting their albums and the accordion’s place in female-fronted rock and roll. 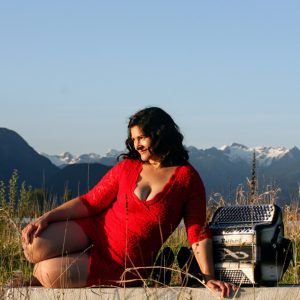 Joana comes from Portugal and began playing chromatic accordion when she was 12 years old. There was an accordion in her home when she was a child and she used to pretend that it was a typewriter. From these humble beginnings she grew up to become an enchanting international artist, and has been performing, touring, and recording for the last 20 years.