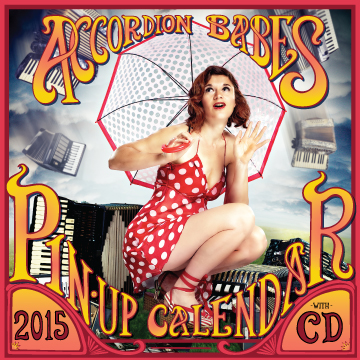 In the 60’s, when rock and roll hit the stages, and the sound of tube distortion became the sound of rebellion, the accordion became known as “that old squeezebox grandpa drags out every Christmas”. It was the furthest thing from sexy, until now. After years of being bombarded with pixels and samples and mp3s, people are craving a real sound, with real soul. The accordions– those living, breathing, sighing and laughing music boxes– are coming out of grandpa’s closet in style.

Here in the Accordion Babes 2015 Pin-Up Calendar, you can meet 12 of today’s up-and-coming accordion stars in their sweetest, sexiest moments with the instruments they love, and hear their passionate music on the CD.

SPECIAL FEATURE: The new song “Wolves are Cool” with lyrics by Peter S. Beagle and music by the Rebel Lovers. This track is included on the Accordion Babes 2015 compilation CD. 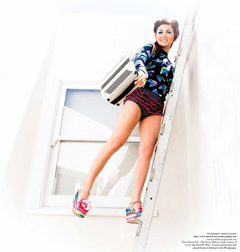 Gabby La La has been heralded as one of the most talented multi-instrumentalists (sitar, ukulele, accordion, theremin, omnichord, voice) this side of the Emerald City! Gabby La La got her start touring with Les Claypool and released her first album on his record label.
La La’s band, Snow Angel is indie pop with a punky edge, laced heavily with spell-casting harmonies to create a dream-pop sound from the heart.

She’s been compared to Patti Smith, Wanda Jackson, and Patsy Cline, and she has distinguished herself within the world’s first family of Cajun music by stirring those already-rocking traditional tunes into a simmering sauce of country raunch’n’roll. She plays several instruments, speaks English, French and Russian fluently, teaches Cajun dancing and cooking, designs websites, is a wife and mother, and wrote The Savoy Kitchen: A Family History of Cajun Food. 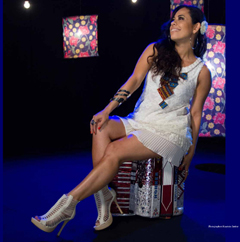 Adriana is a Hohner-sponsored artist from Brazil who adds her beautiful voice, accordion, piano, and musical arranging skills to many projects. She toured the world with two large-scale productions, Orquídeas do Brasil, and as a featured artist in the Argentina-based show La Bomba de Tiempo. She founded the band Barra da Saia in 1998, which blends traditional Caipira music with rock; their album Roça’n Roll was nominated for a Latin Grammy in 2007. She appears in the 2013 documentary film Anjo Bom da Bahia about the life of Irmã Dulce. Her most recent album is a tribute to the music of Luiz Gonzaga called Salve Lua. 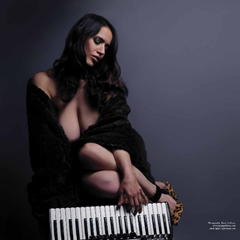 Hailing from Fort Worth, Texas, Ginny Mac fronts a dynamic group that brings a fresh and exciting twist to vocal and instrumental stylings in the country, western swing, Americana, hot jazz, and international music genres. Ginny is a former member of the two-time Grammy Award-winning group Brave Combo based in Denton, Texas. She endorses Menghini s.r.l. Scandalli Accordions based in Castelfidardo, Italy. 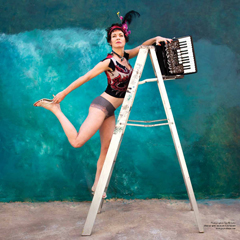 Noaccordion represents a divine paradox that is followed by a sacred irreverence. Often when we are told not to do something it sparks our interest even more and frequently drives us to act upon the things that have been strictly prohibited. Why are there so many signs telling us what not to do? Why is the media obsessed with bad news? Where does good begin and bad end? 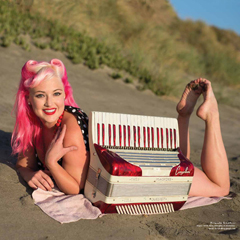 With a lust for wandering and a weakness for whiskey, Miss Roach rocks her accordion and ukulele with her bands Ghost Town Gospel and Jerk Church. Blending traditional Americana with her punk rock roots, singing songs of travel, love and loss that inspire you to raise a glass in heartbroken commiseration, or your voice in jubilant exaltation. 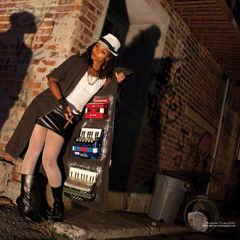 A picked-it-up-in-the-street kind of musician, Sapo likes to tell stories with her songs, jumping from guitar to accordion to piano and then back, in French, English, Spanish, and German. She studied theater and film-making and traveled for a few years in between. Sapo is also an accordion repairwoman (under the name Melodona) who brings her workshop wherever she goes. Her show is a character-driven bouquet of pieces delivered by a chameleon chanteuse in the acting-singing tradition. 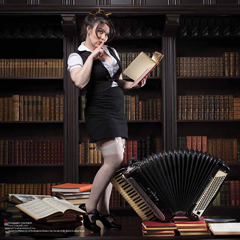 By day, librarian, by night, accordion princess of Xee Nation. Marchette plays and writes music in a rotating cast of bands including Hell’s Bellows accordion quartet, Gravity Engine’s etherial space sounds, the alternative/funk/klezmer band Erev Rav, and the liquor-fueled Balkan mess, Bucharest Drinking Team. You could say she’s “polygigamous” and she won’t get upset. She will however, get very upset if you can’t put things back in alphabetical order.

Photo: Lou Daprile email
Thanks to the University of Washington Libraries

Renée is a rock ‘n’ roller, a musical wild animal. Her powerful grooves, sexy stomp, and spicy wardrobe light up concerts around the world. She tours most often with her German band Rebel Lovers and her California band Whiskey & Women. She appeared as a solo act in Jason Webley’s Monsters of Accordion show, and organizes yearly Accordion Babes Revues. Her style is part Cajun, part blues, part rock, and all soul, on a special button accordion which she modified to play power chords like an electric guitar. She moonlights as an accordion teacher and repair tech at Smythe’s Accordion Center in Oakland, CA.

Renée is the editor of the Accordion Babes Pin-Up Calendar. 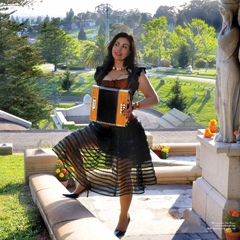 Singer/songwriter Amber Lee Baker brings together smart lyrics and catchy melodies to create her unique brand of sassy folk-cabaret. She has toured the US and Europe to promote her albums Estuaries and Indelible and is currently working on a new full length album of fresh sexy songs. When she’s not performing, touring or writing songs, Amber teaches accordion lessons at Smythe’s Accordion Center in Oakland, CA and is a practicing architect. 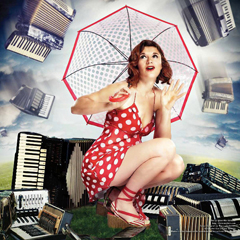 This wild accordion diva from the port of Amsterdam has performed on more than a thousand stages all over Europe and the U.S. west coast – singing, rapping and beat boxing about slugs in love, criminal gurus and hallucinated butterflies.”A formidable force of music, and truly has to be seen to be believed” (Three Weeks, Edinburgh Fringe Festival), “That sparrow can rap!” (An admirer),”Calm down and behave yourself!'”(Jet’s mom)