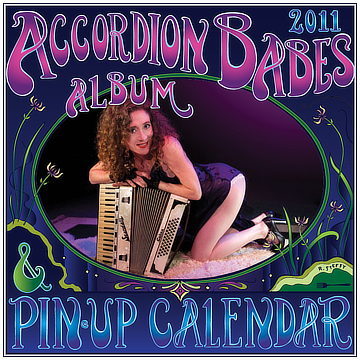 The 2011 Accordion Babes Album & Pin-Up Calendar is produced by independent women artists who are brave enough to squeeze the squeezebox in revealing outfits. They’re also talented enough to knock your socks off. This album is WAY better than the music you usually hear on the radio. It’s got folk music, roots music, jazz, some killer dance tunes. It’s a delicious, eclectic and well-produced compilation album with 13 awesome bands. We even feature an artist from France this year, making it our first international issue. As for the pin-ups, you can see in the photos below that the accordion has never looked sexier or been cooler. 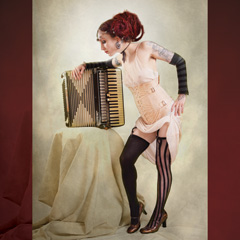 Eyerish’s two favorite sounds that the Accordion creates are drones and the air-button pushing the bellows back in. She is self-taught
and loves to experiment with her accordions in her secret laboratory. 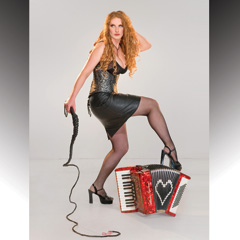 Amber Lee Baker, the captivating world traveling songstress, is taming the accordion with her whip-smart charm! Her one woman show Amber Lee and the Anomalies also includes a loop-pedal, glockenspiel and unusual percussion. She has toured the West Coast (USA), Canada, Ireland, Germany and Spain.

Her second album will be released in 2011 featuring the song “Alpha.” Submit now to her Neo-Folk-Accordion-Cabaret!

Marla Fibish
threemilestonemusic.com
Marla has been part of the San Francisco Irish Music scene for nearly
30 years, known primarily as a mandolin player and singer. Upon reaching middle age, she was struck with a sudden and overwhelming interest in the button accordion. She went for the press-draw style, pursuing the C#/D system with all her might. She currently plays with the trio Three Mile Stone, who released a new album in March of 2010. 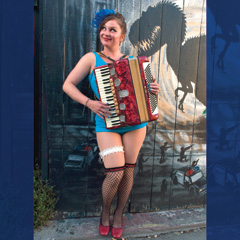 Luz fuses accordion with Circus and Comedy. She clowns with Circus Finelli, combining melodies with amazing feats of dexterity. Her hit single “Chicken Bread” is currently enjoying its tenure as #1 global music video sensation of the century. 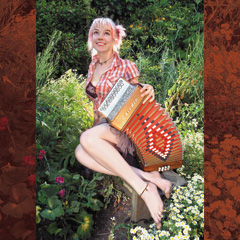 Renée created the Accordion Babes Album and Pin-Up Calendar in 2008 while working at Smythe’s Accordion Center in Oakland, CA, where she currently works and teaches. Her vocation in life is to make fun music for people to work and dance to. Her bands include Culann’s Hounds and Whiskey and Women; she also plays solo.

Her Cajun-Irish-Blues-Punk style has been heavily influenced by her choice of instruments, the button accordion. With her laughing, boot-stomping, high energy performances and wild pink hair, she’s a hard woman to forget. 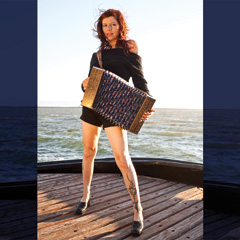 Joan Wilson Rueter sings and plays the accordion in the San Francisco based sea music group The Barbary Ghosts. In addition to accordion, she plays fiddle with Whiskey and Women, and various folk, indie, and Americana groups. Joan loves sailing, dancing, playing music, and Jameson on the rocks. 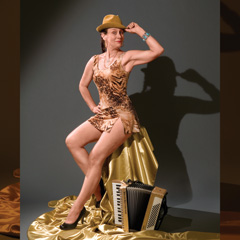 Oh, yeah. She’s wild and crazy. Her moves are smooth. She grooves to wet tuned reeds, hot rhythms, dancing in the moonlight. Catch her getting down on her squeezebox making sounds with those cool cats, The Mad Maggies. Truly copacetic.

Myspace.com/yetilda
jettylag@gmail.com
Born in the port of Amsterdam, the undefinable personage seems to be
escaped from a 70’s punk band, who found an accordion on her road going from Paris to Amsterdam via Delhi and Mexico. Her overflowing energy, unseating humour and surprising lyrics in French, English and Dutch make the adrenaline boil up in your heart. 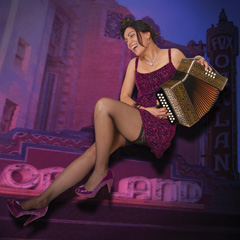 Armed with a sultry voice and a button accordion, Hohner-endorsed Tara Linda writes new tangos, waltzes, boleros, and cumbias for accordion.
A punk drummer from Austin, TX, Tara traded her sticks for an accordion and never looked back. Her new CD Tortilla Western Serenade blends spaghetti western with Tex-Mex, and stirs up the dust devils
and demons. Wayward and whip-smart. 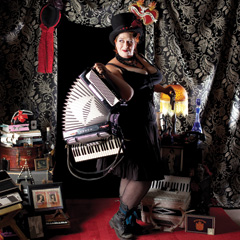 Emchy plays acoustic gypsy punk, americana, ghost town country, murder ballads and drinking songs for the proletariat with the Bay Area bands Vagabondage, Rhubarb Whiskey and the Oakland Wine Drinkers Union, Local #88. With her tall tales about drinkin’ whiskey, love, friendship, and the open road, she is sure to charm you. You can find show listings, music and booking information at www.vagabondageband.com, www.rhubarbwhiskey.com and www.oaklandwinedrinkersunion.com.

Mrs. Hobbs, LA’s “Post-Pop Cabaret Squeezebox Diva”, seduces audiences
with her bohemian alternative-folk music. With the band Ketchup Soup,
she teams up with lovemando to deliver their brand of jazz and blues
for the modern depression-era. And for theatrical works like
“CHIMERA”, she creates an operatic circus with dancers, clowns,
puppeteers, and musicians. Smokin’!

When a woman wears her accordion — a box filled with the colors of an
orchestra — through breathing bellows and dancing fingers, she awakens
the soul’s deep desire for ecstatic communion with other worlds.
Roxanne Oliva, M.A., recording artist, performer,
multi-instrumentalist with numerous CD & film soundtrack credits.
http://roxanneoliva.bandcamp.com/