Sexy isn’t just an attitude it’s an art form. It’s a smear of passion on the dull gray concrete wall of existence. It’s a philosophy, an expression of our primal values as living beings, articulated differently in every man and woman. This year, the Accordion Babes were asked to reach deep down and grapple the ember of sexy in their souls and they did it.

In the 2014 Accordion Babes Album & Pin-Up Calendar, we present the luscious, heightened essences of 12 accordionistas.

Norwegian-born Guro von Germeten is described as a female Tom Waits, Kate Bush on Piaf-pills, or the woman that brings a blush to Stephen King’s face. She and her red accordion stand out as delightfully burlesque with melodic boldness and French Second World War-ambiance. Her music never lacks passion, nor decadence, and she plays every song as if it were her last, with a solid touch of film noir.

Renée’s soul, humor, and dead-on rhythm attract fans from around the world. She plays button accordion like Chuck Berry would have; with a big smile, killer technique, bluesy vocals and playful dance moves. She modified her accordion’s bass reeds to play rock power chords; and she styles her melodies with sweet Cajun soul. Renée performs solo, duo with a drummer, or with her punk-folk trio Whiskey & Women. She also repairs and teaches at Smythe’s Accordion Center in Oakland, CA, and edits the Accordion Babes Album & Pin-Up Calendar.
Photo by: Korey Luna
Dress by the Window Lady

Luz is a clown and vaudevillian specializing in live cartoonish comedy on piano accordion. She plays circus music with influences from Mexico, Eastern Europe, and the golden era of cartoon soundtracks. Luz is based in Seattle with comedy team Duo Finelli, and can be seen on the west coast and traveling the world.

Born in Amsterdam, now living in Paris and Oakland, Jet Black Pearl sings stories about slugs in love, criminal gurus and hallucinating butterflies while beat boxing and playing the accordion, loop-station, and flute. ‘The most eccentric and equally the most talented woman you will see in Edinburgh this month’ — Edinburgh Fringe Festival, August 2012
Photo by: Jordan Reznick

Torch singer Tara Linda keeps her heart in the desert and her heels in the city. Armed with a button accordion, a sultry voice, and a baritone ukulele, the world is her oyster. A Hohner and Lanakai endorsed Artist,Tara plays original jazzy blues and Tex-Americana. She writes new tangos, waltzes, and boleros for windjammer (button accordion) and skirts global genres from Oakland to India. 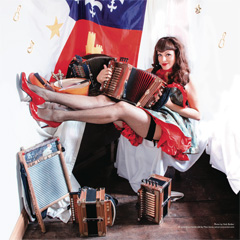 She’s been compared to Patti Smith,Wanda Jackson, and Patsy Cline. She has distinguished herself within the world’s First Family of Cajun Music by stirring those already-rocking traditional tunes into a simmering sauce of country raunch’n’roll. She plays several instruments, speaks English, French, and Russian fluently, teaches Cajun dancing and cooking, designs websites, is a wife and mother, and wrote The Savoy Kitchen: A Family History of Cajun Food.
Photo by: Nick Barber
All accordions handmade by Marc Savoy

A picked-it-up-in-the-street kind of musician, Sapo likes to tell stories with her songs, jumping from guitar to accordion to piano and then back, in French, English, Spanish, and German. She studied theater and film-making and traveled for a few years in between. Sapo is also an accordion repairwoman (under the name Melodona) who brings her workshop wherever she goes. Her show is a character-driven bouquet of pieces delivered by a chameleon chanteuse in the acting-singing tradition.

Nova Karina Devonie has been performing and playing accordion in amazing bands since the 1980’s, including the crazy Crimpolines, the notorious Nyetz, and radiant Ranch Romance. Presently she is a member of the Rolling Blackouts and the ever-mellifluous Miles and Karina, both based in Seattle, Washington. Nova is also a teacher and loves to help students discover (or rediscover!) the versatility and joy of the accordion.

Ms. LaRue plays and sings with 5 Cent Coffee, a 4 piece post-modern jug band full of grit and carnival hokum. They play original songs set in the dusty American tradition of travelling circuses and rail-riders down on their luck.With soaring vocals, sometimes two accordions, sometimes two ukuleles, washboard and junk percussion, their sound is big and brash but soft and mournful; and always compelling.

Joan Wilson Rueter is a songstress with a love of dusty old attics and buried treasure. Inside her head is a library of folk songs whose origins stretch back through centuries. She’s also a compulsive songwriter, constantly writing new material and often blending the old with the new. Sometimes serious, sometimes silly, and always sincere, Joan divides her time between playing fiddle with the lady folk trio Whiskey & Women and accordion with the San Francisco based sea-music group The Barbary Ghosts.